What Tech is Inside of a VR Headset? (Quest 2 Teardown)

When I first tried a Quest 2 it felt like magic. How on earth did this thing work? Was it a major leap in technology? How was it only $300?

It turns out hardware-wise VR headsets aren’t as complicated as they appear. They effectively have the exact same technology stack a mobile phone does minus a couple of lenses on the inside.

That sounds crazy and you probably don’t believe me. So check out this teardown of the Quest 2 by iFixit where they literally take the device apart in the name of science. Or, I’ll go through it item by item in my post below.

Lenses are the primary tech VR headset have that mobile phones don’t. They’re needed to help make sure the light from your screen is hitting your eye just right. As of 2022 there’s really only a few different lens types in every commercially available headset.

If you’ve ever bought a lens for your full-frame camera you know that they’re crazy expensive (and heavy). VR lens tech tends to be the opposite of that where they’re more focused on lenses being cheap and light so that they can turn a profit on a $300 headset without straining your neck.

As such, virtually all headset manufacturers are using a fresnel lens design up until 2022. Seriously, check out some of the most popular headsets of the past 5 years.

Fresnel lenses aren’t necessarily bad. But, they have ridges that scatter light as you move away from the center so it becomes imperative that your IPD adjustment be spot on when using these lenses.

The Quest 2 is always running 4 fisheye cameras to track your controllers and guardian boundary.

And it’s actually difficult to find more information on them than that because Meta didn’t publish the official specs of these cameras. That said, smartphone cameras use up a ton of power and produce serious heat. To combat that we know these cameras are low resolution & black and white.

This is important when we start talking about augmented reality glasses. In the even you wanted to use cameras to present reality (vs. an overlay like Google glass), it’d require a lot more power for the cameras used.

It’s a hurdle that makes me believe that type of augmented reality may be several generations away.

At face value the screen of VR headsets doesn’t seem that interesting. VR screen really doesn’t sport any new tech that’s different than discussed in the most latest smartphones and television. 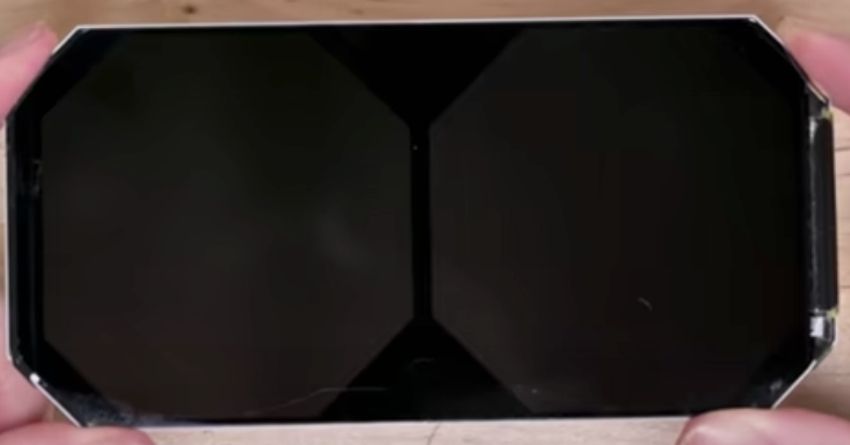 That said, two screen components are very important when it comes to VR.

I wrote a blog post a while back about whether it even makes sense to film 4k YouTube videos because you don’t own many monitors capable of displaying in 4k (your iPhone, iPad, and computer monitor are not 4k). Plus, even if these devices were 4k, human vision couldn’t tell the difference unless your eyes were very close to the screen.

In VR, your eyes are incredibly close to the screen, so it matters.

I have an entire post on the optimal resolution for VR video. The gist is that when you hit 35 pixels per degree (PPD) you’re getting pretty close to matching real-world vision. The Quest2 has a resolution of 1,832×1,920 per eye with a PPD of 19. Basically, the industry needs to double the pixels in that amount of space to start getting rid of the screen door effect.

And getting that many pixels into that small a space would be way more pixels per inch than we’re currently packing into almost any smartphone. So it’s possible that type of resolution is currently expensive to produce.

Is OLED, QLED, or Mini-LED better? The answer is who cares, they’re all better than an always on LCD panel.

Being unable to turn off the backlight means you can’t experience black anywhere on the screen (just a dark gray color). It hurts contrast ratio, which is important for being able to feel truly immersed in VR.

These techs that turn on individual pixels also tend to have “10-bit color.” This effectively just means that the pixels get brighter than a typical LCD screen and increase contrast. It’s just another tech to make everything look more real and you want it in your headset (although I’ve read the extra brightness may impact lens design).

It’s actually amazing the Quest 2 is as awesome as it is when it’s powered entirely by a Snapdragon XR2. This is roughly the same processing power that’s in a an iPhone 11 (released in 2019)!!! Only not nearly as energy efficient.

Worse, there’s no competition! The Snapdragon XR2 is the most powerful processor anybody has ever put in a commercially available headset as of 2022. It’s shocking there hasn’t been more innovation here!

I expect that to change when Apple enters the industry and releases a VR headset powered by its M1 technology. If that happened, it would give Apple by far the most powerful standalone VR headset in the world which would shake up the industry as the amount of processing power available to standalone devices is really holding back what they can do graphically.

Often overlooked, the battery is important because it’s actually powering quite a few components.

The Quest 2 is rocking a 3640mAh rechargeable lithium ion battery pack that lasts for about 2 hours of gameplay give or take.

For reference that’s only slightly bigger than the 3,227 mAh battery found in your standard iPhone. Which probably shouldn’t be that surprising since virtually all of the tech in this device is also in a mobile phone. But, for some reason it still amazes me.

The speakers in the Quest 2 actually have an interesting design as they’re built into the armbands to help conserve space. But there’s really not much special about them beyond that.

The rest of the VR headset tech stack is really not all that interesting. You have a casing to house the unit, a fan, heatsink, wiring, and motherboard. That’s really about it. You’re now aware of what’s inside of your VR headset!

I was really shocked when putting this together to learn that a VR headset effectively had the same hardware components as a mobile phone (minus the lenses).

However, maybe I shouldn’t be that shocked since the first iteration of virtual reality was Google Cardboard where you literally just put your smartphone in a box and strapped it to your head.

How To Use Gmail With a Custom Domain Name For Free