7 Reasons You’re Never Too Old To Start A Business

If you’re anything like me, you grew up with iconic stories like Bill Gates, Steve Jobs, and Mark Zuckerburg. These people each started what would become new multi-billion dollar tech industries before they were old enough to buy a beer.

When I turned 30, I was in a job I hated with zero business experience and asking myself, “Is this it?” “Am I destined to slave away at a job I don’t enjoy for another 30 years then die?”.

These stories of people becoming ultra-successful so young had me feeling convinced I’d somehow missed the boat. That life had already passed me by.

Luckily, I was oh so very wrong. As you get older, starting a business only becomes more attainable. The stories we tell of the Jobs and Zuckerburgs of the world aren’t typical business stories. It’s akin to women comparing themselves to supermodels on magazine covers.

30’s not too old. In fact, 30 is absurdly young, and I don’t believe it’s ever too late. In this post, let’s get into 7 reasons why you’re never too old to start a business.

1) Most Businesses Are NOT Started By 20-Somethings

People over 40 start an astounding 82% of businesses! [Source]

Startups are rarely created by 20-year-olds who are dropping out of college. That’s a myth according to the numbers.

2) Start-ups Only Last For 3 Years

Wait, Disney and McDonald’s have been around for like a hundred years. Now you’re telling me with a straight face that a business can only last for three years tops?

The way the startup life-cycle works is you start out as a random person without a heck of a lot going for you. Usually, very little money, time, talent, connections. The list goes on.

You start only with your idea and the effort you’re willing to put into bringing that idea to life.

From there, you begin to implement your idea. It will take significant effort and up to a few years to get it off the ground. But within 3 years of consistent effort, you should have a good idea of whether it’s working or not. Whether you need to kill off the business, pivot in a new direction or expand operations.

The whole process looks a little something like this.

Succeed or fail, it’s tough to be a 1 person startup forever. Within 3 years you’ll either recognize it’s not working out and move on. Or you will have succeeded to the point where your business grew into something different than a one-man band.

So Yes, McDonald’s has existed for 70 years. But before it became a multi-billion dollar franchising business, it was just a couple of guys who owned 1 burger joint. That single burger joint looked nothing like the McDonald’s you see today.

I choose to see this evolution as a great thing. You can expect to see the growth phase of your business within a few years time. Even if you were 80 years old, you’re young enough to see your business creation flourish.

3) You Get Smarter As You Get Older

We’ve all attempted to explain to an elderly person how a computer works at one time or another. Only to have them resist learning how that dang fangled magic box works at all costs.

A lot of old people don’t like to learn new things. Well actually let me rephrase that.

A lot of people don’t like to learn new things.

Old people who don’t like to learn new things are just people who haven’t liked learning new things for an extremely long time. They didn’t get dumber because they got older, they were always like this and simply never changed.

You’ll get smarter over time if you embrace learning and stay curious. Year after year. It will never stop. If you keep working at learning new things, you’ll be smarter in 5 years than you are today.

If you’re anything like me, it gets to the point where you look back at your past self in absolute disgust and horror.

It means if you’re 30, you’ll be smarter and thus better at starting businesses at 40. The same is true between 40 and 50 etc.

All you have to do is keep being open-minded and learning new things. As long as you never get so set in your ways that you’re “too old to learn new things now” you’ll be just fine.

When I was a kid, I imagined that you had to put together a business plan and then get approval from investors or the bank to start a business.

If you wanted to buy an office or hire employees before your business made a dime, you would need to find investors. But present-day the vast majority of startups are self-funded.

I’ve started a couple of different digital businesses so far that made real money, and they were all self-funded. The most I ever went in the hole to get any of my ventures off the ground was $1,000-$3,000.

That’s not uncommon, the vast majority of startups fund themselves with personal funds, credit cards, or by simply not needing a ton of startup cash. [Source]

I was a guy in my 30’s who already had a 10+ year career as a software engineer when I started my first business. $3,000 was not a massive risk for me, even if my ideas bombed.

This is true for most people. Most of us will self-fund our creations and as we get further along in our careers that gets easier to do.

5) You’ve Learned From All Your Past Business Failures

I started my first business almost by accident. I was trying to figure out how Amazon was 2-day shipping everything for free while post-office shipping prices were through the roof.

Boom, my Amazon FBA business was born. There was a mild problem with that, however. It turns out I had absolutely no clue how to run a business.

I didn’t understand how to start a business legally, how to do my taxes, how to schedule my time, why I shouldn’t have a business partner. I could write you a giant list of things I didn’t know how to do that later came back to bite me in the ass in some minor way.

There is a bright side to this. Whether you get these issues right or wrong initially, you eventually learn how to do them correctly. So 3 years later when you decide to start a 2nd business, you don’t have any of the same problems, things go much smoother. Learning from past mistakes makes you more and more talented as you age.

6) You Gain Hard Skills Throughout Your Life

I worked for over a decade as a software engineer. Being incredibly good at coding is a skill that 30-year-old me had that 20-year-old me did not.

I also started creating businesses around 30. In my first business, I learned how to get physical products made and imported into the US.

When that business started failing because depending 100% on Amazon for sales was stupid. I created my own Shopify website and started selling physical products to cold traffic via advertising.

I now knew how to use Facebook Ads. How to use Adwords and Google Shopping ads. How to create lead magnets, why upsells and downsells were extremely important to profitability. How to build my own website and apps. How to do the accounting for my business.

As I did more and more things, I gained more skills. As you get older, those skills begin to add up, and you get more and more formidable as a person.

Now if I want to create a new app, I can because of my coding skills. Because of my marketing skills, I’ll know if I have a chance to sell that app before I build it. My chances for success have skyrocketed because of the skillsets I’ve built up over the years.

At 35, I know how to do all these things well, and I can just do them. At 20, I would have had a massive learning curve that set me back months or years as I attempted to gain the necessary skills.

7) You Gain Emotional Stability As You Age

Many people don’t realize this, but running a business will be an emotional roller coaster for you.

First off, to create anything and put it into the world takes a lot of effort. To pour your heart and soul into something and then release it for the world only to have them take a giant dump on it? That’s basically the definition of starting a business. When you’re young, that type of feedback from the world hurts pretty bad.

When you’re older, you will become more and more comfortable with yourself. The things others say or think about you become less and less important to you.

When you start a business for the first time, the people you love will begin saying things to you about your new business and they won’t always be very kind.

When I started my first business selling on Amazon, I was so excited. After over a decade of being a 9-5 employee, making real money from outside of that was incredible. I wanted to tell everybody about it.

Here’s the thing you may not yet understand. Other people who hate their jobs aren’t going to celebrate the idea that you’re able to escape from their hell. They will flat out tell you that you don’t deserve it, that you got lucky, or worse.

I was sort of hoping my family and friends would be celebrating this. Not that I’d always be on the defensive about it.

It’s emotionally taxing to deal with something like that.

Beyond what people say, there are also the emotions of the ups and downs of success, power, and status. My first business did ultimately fail, let me tell you that’s an emotionally taxing thing. I went from being a 9-5 employee to a business owner and back to a 9-5 employee.

And I didn’t even have any employees I had to lay off which would have been even more emotionally devastating.

You need to be emotionally tough to run a business. Which I was not at 20, back then I wouldn’t have been ready to handle some of the things that come along with it.

But at 30 or 40 after you’ve done it a couple of times, it gets easier. You get used to it, and you get stronger. So if you haven’t started a business that became a significant success yet don’t worry, start now because you’re definitely not too old for it!

Why Writing on Medium is a Disaster for New Bloggers 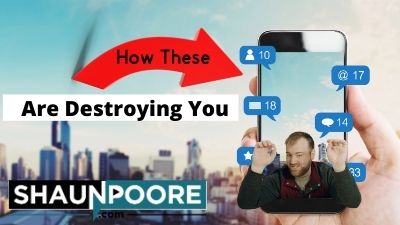 Push Notifications are Killing You; How to Turn Them Off
0 SHARES
×