in 2022, you can create a YouTube channel and a course, and within a few years, be making more money than you could in any job. This begs the question, is YouTube a valid career choice? Let’s talk about it!

How Long Will YouTube Exist as it is Now?

The Internet changes incredibly fast. Fourteen years ago, nobody on earth had a smartphone, used an app, taken an Uber, or ordered anything via Amazon Prime. Take a minute and think about that.

So when trying to predict how long YouTube will be viable, it’s foolish to try and guess. There’s a ton of risk involved; I’d be worried about all of the following and more (over the long term).

All careers change over time (and sometimes they change for the better). YouTube isn’t inherently riskier than, say, going to college for journalism. However, you do have to acknowledge the YouTube space is volatile.

Build an Emergency Fund Before Relying on Any Online Business!!!

My first online business involved me selling physical goods through Amazon FBA. I had a one-month period where I made about $40k in revenue. I assumed this income was safe for at least a year or two, so I quit the job I hated and did FBA full-time instead.

Flash-forward 3 months, and it turns out the income wasn’t safe.

I want you to realize that Internet Entrepreneurship is only a “safe” thing to do if you have an adequate emergency fund. To me, a sufficient emergency fund is two years’ worth of expenses. In that case, you’d still have plenty of time to pivot the business and/or get a job if things went south.

What you don’t want to do is be living paycheck to paycheck and suddenly stop getting paychecks. That will cause a level of stress in your life that nobody should ever have to live with. It’s hard to dig yourself out of the hole when you’re already that deep.

There Are No College Costs Associated With YouTubing

You don’t need a fancy sheet of paper saying you’re good enough to be a YouTuber; you can just do it! It’s a meritocracy!

You could certainly go to college for filmmaking (or something else) while building a YouTube channel. So it’s not an either/or choice. My alma mater (shoutout to Ithaca College) is one of the best communications schools in the country.

But, it is pretty nice not to need to spend $60,000+ and four years of your life to take on an entry-level job and work your way up. YouTube offers people aren’t going to college an interesting alternative.

To get subscribers and make money, you’ll likely need to be good at making videos.

To get good at making videos, you’ll learn to write scripts, be good on camera, edit videos, improve YouTube audio, choose YouTube music, etc. Plus, your camera gear will not be cheap.

That said, there is a strong job market for people who master these skills. Particularly if your YouTube channel demonstrates your mastery for all to see.

You can get hired for weddings, commercials, movies, editing, audio jobs, etc. I’m sure most YouTubers don’t set out to work for the man. But, it doesn’t have to be either/or. You can get paid in these fields while following your passion. For instance, take a job doing video editing while starting your channel. You can get paid and pick up skills that will be invaluable.

Plenty of YouTubers make $0/year. I certainly did my first year on the platform.

And YouTube ads notoriously don’t pay a huge amount per 1,000 impressions. So even YouTubers with somewhat large followings may not be making large amounts of money if they’re not selling products, working with sponsors, or affiliate marketing.

That said, plenty of creators make large amounts of money on the platform.

No career you could get has the theoretical ceiling that YouTube does. You can make professional athlete type money on this platform if you’re successfully selling products.

A promising career implies some type of stability.

No job is 100% safe. I work in software, I’m dealing with contracts that come and go every few months. Sometimes people get laid off. When that happens, a job is no safer than entrepreneurship.

That said, I know how much my job will pay me each month. If I got laid off, I would qualify for unemployment insurance. I know that hundreds of other companies out there will pay me the same amount. They’ll give me health insurance, life insurance, PTO, etc.

Entrepreneurship doesn’t work like that. If your YouTube channel gets shut down, it’s game over. A traditional career offers more safety than that. So while I definitely recommend you attempt to make YouTube a career (if you’re passionate about it), I’d also have a backup plan and emergency fund before jumping in.

Working a job and building a business is nice; you just have to learn to be productive with your time.

Shaun Poore
Shaun Poore worked as a professional software developer for 15 years before transitioning into content creation and digital product businesses. Shaun's currently focused on providing as many people as possible with actionable advice and tools they can use to succeed online, without the fluff or BS that too often plagues this industry.

How To Make a 360° VR YouTube Video for Beginners 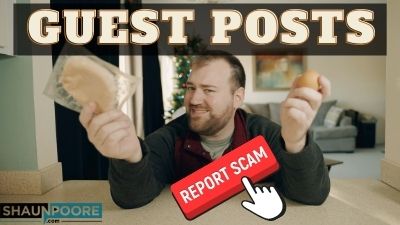